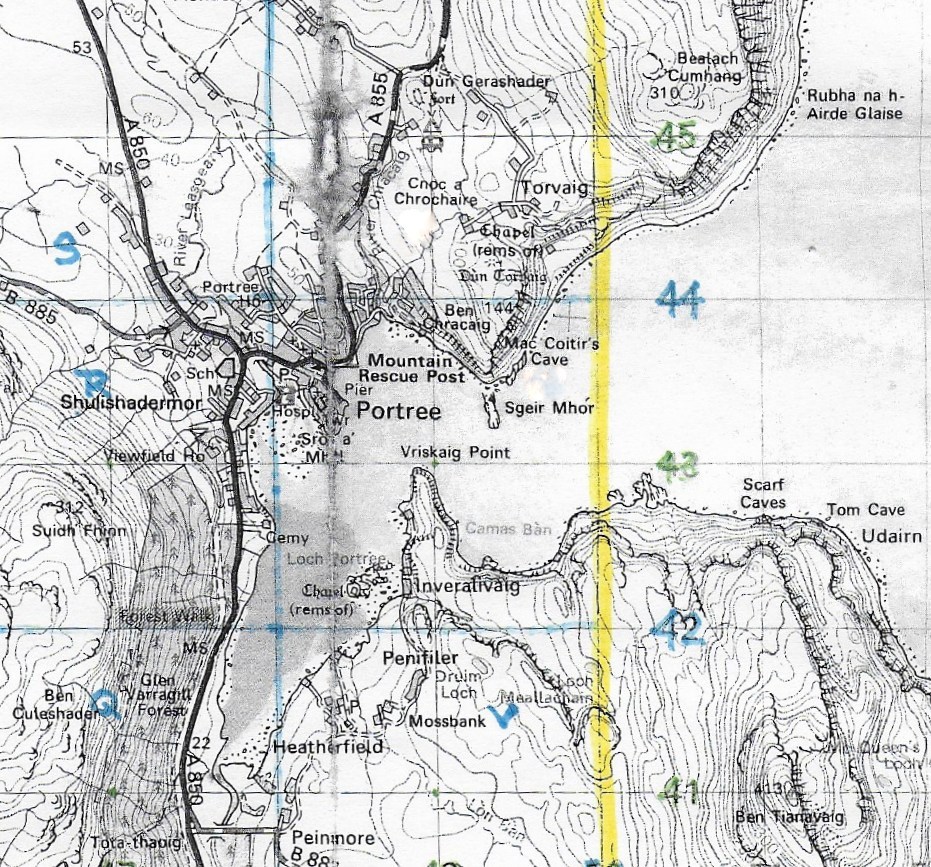 We met at the gate of Scorrybreck House at 1.30pm on July7th, the members of Step It Up Highland, Portree, led by John Kennedy, with Rosie Somerville representing ATLAS Arts and myself, the local artist invited to be present on this walk as part of the Coig Sgiathan Project that ATLAS Arts are promoting during 2017.

Rosie briefly outlined the aims and objectives of the Coig Sgiathan /Five Wings of Skye project;
“If you put a botanist or an ornithologist into a ramblers’ walk everyone knows what to expect but putting artists of different disciplines on walks is experimental. None of us knows, least of all the artist, what will happen. So let us go and find out.”
Not her exact words but that was the gist.

We headed up through the wood, past the old MacDonald laundry and up along the march dyke on to the moor at the back of Beinn Chracaig. The group fell naturally into twos and threes according to the state of the track. Three ladies and a dog left us at two o’clock to go back to work and the group became more intimate and leisurely. We ambled, stopped, discussed flowers, views, anything and everything that caught our interest.

I had chosen this walk round Scorrybreck because I have lived within sight of it for fifty years and know it better than anywhere. I have clambered all over it, inside it (MacCoitir’s Cave), canoed and walked and sailed along its coast and flown over it, once in a helicopter and once in the seaplane. I have studied its botany for myself, for the official recorders and also for the Nicolson clan but today all the Latin names I used to know seemed to have deserted me. I had not brought a reference book because I was travelling light – with only my own wee pocket notebook into which I had copied a few of my Scorrybreck poems in case I had the opportunity to prove I was a poet!

I was finding the walk quite easy – no adverse conditions weather-wise or midgie-wise and no fibromyalgic handicaps today either. I had expected to be tail-end Charlie, struggling to keep up with the more practised walkers, but no, I had some of my old style left. My boots, stick and waterproof breeks gave me confidence. Three cheers for that!

Walking round by Torvaig Farm is a much better option in the summer because the bracken is high on the hairpin track downhill; the going is easier and the views are even more spectacular.

When we stopped to take in the view I had fallen into step with Dave and Calum and began recounting my story of the dog and the bra, pointing out exactly where the events had happened. Their laughter and interest gave me confidence to offer to read one of my early jingles, verses I had written for my son, Ross on his 15th birthday when he was forever exploring McCoitir’s Cave.
Later, to prove I could write seriously, I read “Seasons on Scorrybreck”.
“That’s really tender!” said Dave.

me reading to Dave and Callum

We wandered down the track, examining plants, rocks, bantering, sharing knowledge.
“What’s this? What do you call that?” “Trifolium dubium maybe”
“Is this a healing herb?” “Yes. It’s a wort – milkwort.”
“Is this a lava bomb?” “Yes. Look at the iron in it. Feel how heavy. See how it peels and flakes round and round. That’s onion-skin weathering.”
“Oh! Look! The wee white rose of Scotland!”
(We had a Yorkshire man and a Lancastrian in our gang.)
“That’s not just the white rose of Scotland; it’s the white rose of York – much better than that pale pink thing the Lancastrians have!”
Dave and John laughed together – an old joke.

Banter, chat, reminiscences, struggles with memory, all of us in the same boat with that. I fell into step with Calum from Benbecula as we crossed the glorious buttercup pasture on the limestone between the crags of Beinn Chracaig and the Beal and talked about the hardships of crofting, the impossibility of sustaining a living single-handed on a small piece of land, of the struggles of our ancestors, all crofters.

We diverted our course across the buttercup meadow to take a look at the Sailor’s Grave. In answer to John Kennedy’s query about the solitary headstone at our first meeting, I had done a fair bit of research in the Portree Archive Centre in Nancy Gatz’s excellent file on the subject.. I also pointed out the DMD slate which seems to prove that others are buried next to Talorgan’s ancient cell.

A faithful servant to his earthly master

From the death certificate – a copy in Portree Archive Centre.

(The stone has been cleaned and restored twice by visiting RN craft in 1925 and again in 1928.)

THE MISTY ISLE OF SKYE p25:

“He was buried here, not in the parish churchyard and rumour hints darkly of those who, thinking even this ancient place of graves too sacred for the bones of one who has raised an impious hand against himself, cast him back once more into the sea. Peace be to his soul wherever his body lies.”

On then through the breach in the dyke and on to the path across the boulder scree under the nose of Beinn Chracaig. We proceeded carefully. The rough track needs careful negotiating when you have poor eyesight and stiff knees, so we talked less as we walked and stopped when we wanted to discuss something. I was happy that I was still managing the walk at this point with far less fatigue than expected. The company was stimulating and supportive. It made me think that on another fine day I would like to walk with S.I.U.H. Portree again.
As we came down to sea-level and on to the basalt again the flowers changed. The Scorry Circuit is rich in different habitats – woodland, moorland, acid hill pasture, crags and fields, riverbank and seashore.
“Look. Here’s agrimony.”
Some of us sat down rather thankfully at Battery Green.

There were more and more flowers to notice, to discuss, to name or to puzzle over. I went back later in the week to check on a few before I compiled the list of all I had noted mentally as I passed.

We were slowing down as we came through the hazel wood.

“Did you know there was a landslide here? Those trees used to be above the path.”
“No. I didn’t know that.”

“Have you seen the bird’s nest orchid again?” asked Nancy.
“No. Not a sign of it. I keep looking but it will probably lie dormant again for another decade or two.”

“See this plant. it’s very poisonous. Oenanthe. Hemlock water dropwort.”
“Is this one poisonous too?”
“I think that’s wild angelica. I’ll have to check with Stephen Bungard (the botanical recorder for the area). Umbels are precarious things. Some are edible; others are not. Like fungi. Best left alone if you are not sure.”

The walk was a stroll now, stepping aside for other walkers, meeting and greeting, past Murdo’s Well, past the Nicolson flagpole, the refurbished boathouse and on to the tar again. Back to the town. But there were still wild flowers to be seen – a wealth of red campion, meadowsweet, St John’s wort and cow parsley and a rare sighting of dames’ violet by the Cuillin Hills Hotel roadend. I thought the tree-felling operations had killed it but there it was, making a comeback. That pleased me. 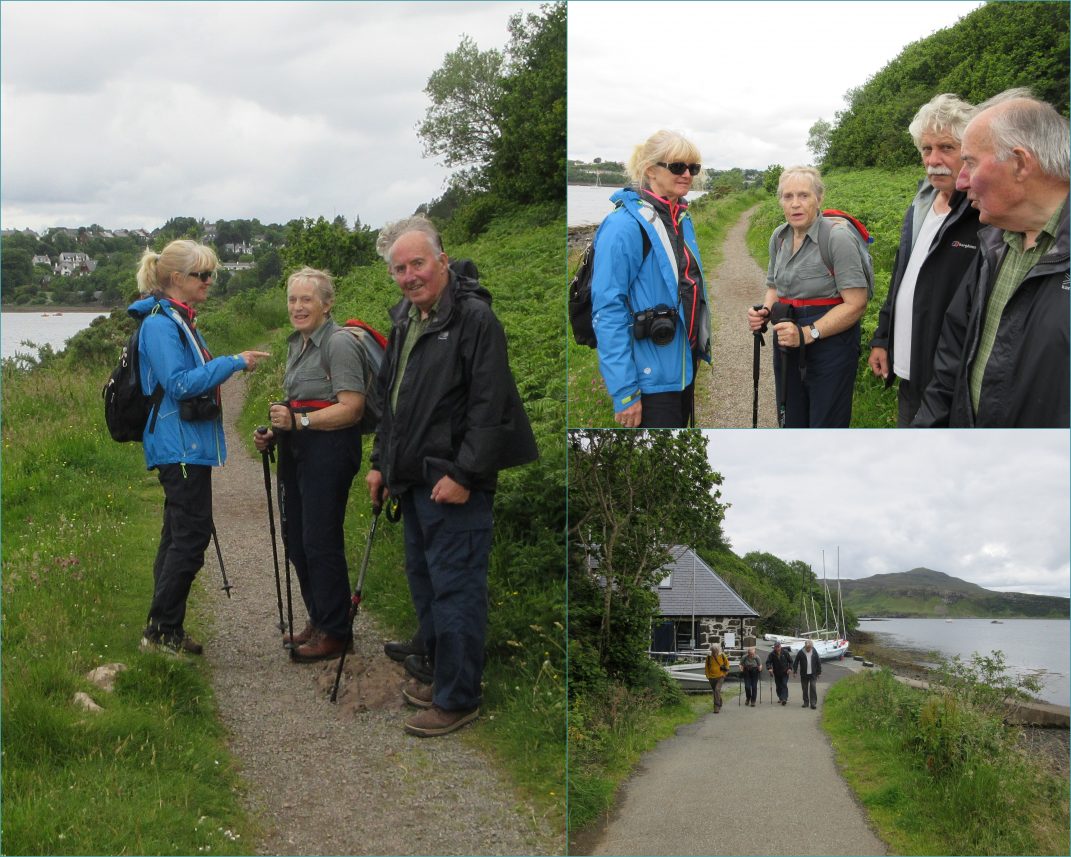 Back by the yellow pimpernel patch where I sprained my ankle in a pothole last year; back to the bridge over the Chracaig river, back to my car. It was 5pm!

I said, “Goodbye” there. The Cuairt Sgoirebreac had come full circle. Despite my misgivings I had done it with great pleasure and enjoyment.
“You should join us,” said the men and I think I might. John promised to put me on the mailing list.
“You were grand,” said Rosie.
We all were.

But would it have been as good if we had gone round widdershins?

I don’t think so! 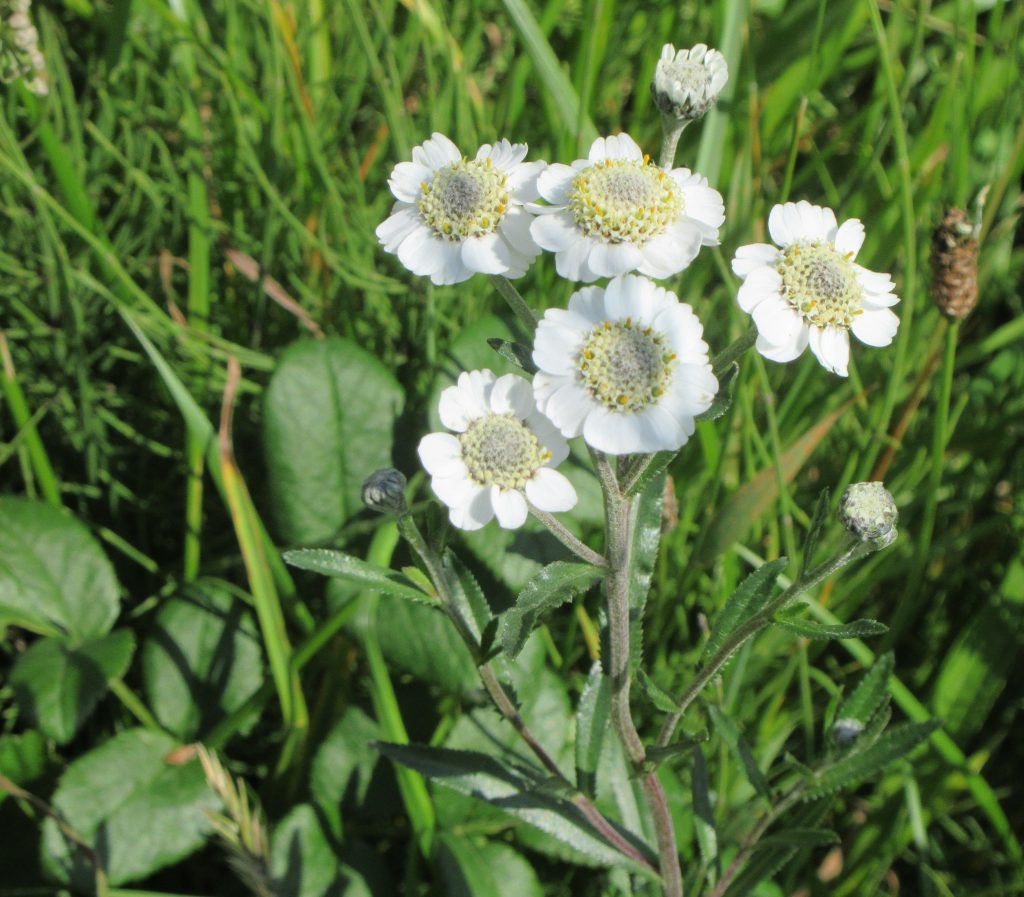 [Two Scorrybreck stories can be found in Scenery of Dreams by Morag Henriksen; page 158 Wild in the Country; Page 162 The Wayfarer; available on Amazon Kindle]